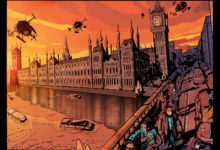 From mid 2015 through to early 2017 I was privileged to be the Colourist on Image Comics’ Surgeon X, a 6 issue limited series written and drawn by the brilliant team of Sara Kenney and John Watkiss. Significantly, it also marked the big return to comics of the legendary force behind Vertigo Comics, Karen Berger.

Surgeon X is a Sci-fi thriller set in a near-future London which is quickly becoming a dystopian nightmare due to the spread of super-resistant bugs and viruses, and the resulting antibiotic austerity being forced upon an unwilling public. Against this backdrop, one rogue doctor, Rosa Scott, decides to take matters into her own hands.

Here is a selection of some of my favourite pages from issue #01. This entry was posted in Colouring